This website was created in hopes of helping talented Indie writers promote their books, which can be a daunting task at the best of times.

Please cruise the site, paying special attention to our book reviews and book trailers, posted in the right sidebar as Recent Posts.

Also feel free to access our Marketing Tips page, which details a 40-step plan to launch and promote your new book — or relaunch a previously published one.

In any case, we’re glad you stopped by. Contact me personally if you have any questions or suggestions. 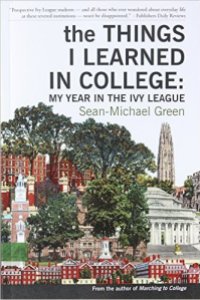 Ah, the storied halls of Harvard, the charisma of Cornell, the panache of Princeton, the naked parties of Yale.

This is the insider’s guide to the Ivy League, the juicy parts of life and legends at these hallowed institutions, told with tongue firmly in cheek — a la George Plimpton — by a man who spent a year living and studying at the elite schools that line the East Coast of America.

With erudite humor, author Sean-Michael Green recounts his year as an avid observer at eight Ivy League institutions and tells readers the facts and fables embedded in the very fabric of Cornell, Brown, Dartmouth, Yale, The University of Pennsylvania, Columbia, Harvard and Princeton.

Actually, there’s less emphasis given to undergrad misbehavior — including naked parties — and more emphasis on his first-hand experiences at each of the college campuses. It makes for a fascinating, unique look that you won’t find in the universities’ recruiting materials.

This work should be required reading for all college-bound students and their parents. You’ll learn a lot — mainly about these august institutions — but also about the general tenor of college life today. And for those folks with fond memories of fraternity parties and the whole undergrad experience, this insight into today’s collegiate environment is illuminating.

There are legends, traditions, and anecdotes both arcane and highly informative. At Cornell, for example, one story about two statues stands out:

“Painted footsteps on the walkway, courtesy of the local fraternities, span the space between them. These footsteps speak to the legend that if a virgin were to walk across the campus at the stroke of midnight as the carillon chimes play, the two statues will rise up, walk to the center of the quad, and shake hands.”

At Dartmouth, where he spent a month living in a rambling edifice known simply as The Experiment, he describes the ambiance:

“Without opening the refrigerator, or stepping into the bathroom, the house smelled of spaghetti sauce, marijuana, and sweat. It wasn’t unpleasant, but it was a defining feature of life there.”

The author provides exhaustive commentary on all the schools, sharing moments and observations on the stunning architecture, incisive lectures on a variety of topics, and revealing interviews with students, who impart local lore and opinions on the respective campus cultures.

This is an ambitious and excellent work, well written and laced with dry humor. Even the chapter subheadings are funny.

Five stars to The Things I Learned In College. Prospective Ivy League students — and all those who ever wondered about everyday life at these revered institutions — won’t be disappointed.